Before Port Swettenham existed, there were Swettenham Pier in Penang - a deep sea harbour, and another at Keppel Harbour in Singapore.

Port Swettenham was inspired by Frank Swettenham. This port was for exporting rubber to the USA, and tin to England. It was also used for picking up and sending home Hajj pilgrims, before Tabung Haji was formed and commercial flights were made available.

Land fill helped and malaria ceased to exist. No malaria is reported anymore. There is no malaria in Malaysia today.

The same mosquito menace is being experienced by areas with many lakes and swamps today - for example Mandurah and Serpentine Hill in Western Australia. 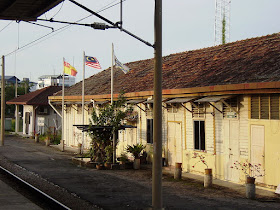 1880
- KL replaced Klang as the capital of Selangor
- transport between KL-Klang was by horse or buffalo wagons, or boat
- William Bloomfield Douglas was the British Resident
- Sir Frank Athelstane Swettenham described the journey as long and boring
Suggested to add a railway line to link KL to Klang


Britain's Sir Ronald Ross proved in 1897 that malaria is transmitted by mosquitoes. Port Swettenham was the first colonial area to benefit from the discovery. Swamps were filled in, jungle cleared, and surface water diverted to destroy mosquito breeding grounds and combat further disruption to port operations. The threat of malaria was removed completely by the end of the exercise. Source: Wikipedia

1902
- the Selangor Polo Club was founded in Port Swettenham

1914
- 2 new births and other port facilities were added

1930
- Port Swettenham deep seaport was developed by the Malayan Railway
- Hajj pilgrims could leave Port Swettenahm for Penang and onward to Jeddah. East coast
pilgrims preferred Port Swettenham rather than go down to Keppel Harbour in Singapore.

1995
- Port Klang Cruise Centre opened in December 1995 at Pulau Indah,
next to the cargo terminals of Westport

Malaria
- malaria is a fatal disease
- it killed more than 0.5 million people in 2014